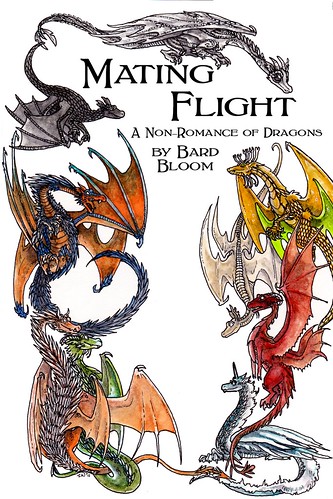 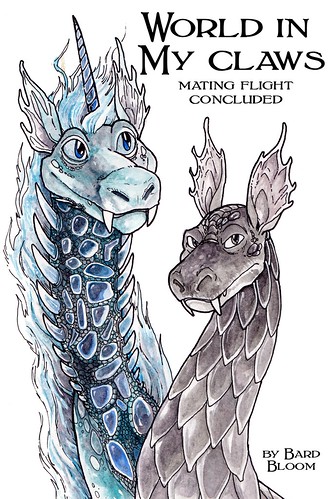 About the books
It's finally time for Jyothky and eight other misfit adolescent dragons to go off to an unexplored, dragon-free universe and decide who will marry whom. They're astral dragons, mighty and arrogant, with devastating breath weapons and vast magical powers, and they're not even there to conquer the place. How much trouble could the natives possibly be — even civilized and technologically sophisticated natives? Or the mind-controlling parasite worms, or the undead god, or any of Hove's other surprises?

…Maybe quite a lot of trouble, but not as much as they will bring upon themselves.

Special Sale Price!
The e-book for the first volume is just $0.99! Seriously, if you've enjoyed any of Bard's work and you are not down to the last $0.99 you need to buy ramen noodles so you don't starve, pick that one up. AT LEAST.
Personal Recommendation from Rowyn
The Mating Flight duology is my favorite of Bard Bloom's published works to date. It is an incredible, intricate story, with such scope that I would have needed at least half-a-dozen viewpoint characters in order to pull off. This makes it all the more remarkable that Bard manages it brilliantly with just Jyothky, the often-clueless first-person narrator. The reader will be surprised by events, but always able to understand them. Even when Jyothky doesn't.

Bard's dragons are creatures of breathtaking power, vast talents, and startling pettiness. Their culture is both alien and perfectly understandable from their perspective. Jyothky makes a splendid guide to this culture, despite -- or perhaps because -- she is frequently blind to its faults. When the book opens, Jyothky is a whiny, self-involved youth whose concerns revolve almost entirely around how she is perceived by her peers. Her growth from this point is slow and fitful and delightfully plausible. By the end of the second book, she has grown immeasurably, but still retains the essential qualities that make her voice unique.

The early part of the book is engaging, as Bard sets the stage for "how a mating flight is supposed to go". The need for this context won't become clear until later, as Jyothky's own mating flight goes off the rails in ways she could not even imagine at the start. And then just gets stranger from there.

Beyond that, the themes of the book are delightful. All levels of privilege get showcased. Jyothky is a dragoness wielding immense personal power: she can melt mountains, casually shrug off the effects of heavy weaponry, destroy weapons of mass destruction, heal herself and others of mortal wounds, and far more. Yet for all this, she is also crippled: she has no sense of touch. The spells that tell her when she's been damaged are no subsitute for a sense of pain, or for feeling warmth, cold, a caress, a hug, or anything else. Neither her power nor her disability are downplayed in the story, even though she takes the former for granted and whinges frequently about the latter. The book explores how vast power may not be sufficient to achieve personal goals, and for that matter that getting what you want might be one of the worst outcomes. One sees the devastation wrought by overconfidence and carelessness, and how people of all kinds can do terrible things in the name of pride. Everything that happens in this book follows sensibly from the choices characters make, from their worst blunders to their greatest triumphs. (Arguably the same event, in certain cases.) When reading this book a little piece at the time in the serial, the reader can miss its breathtaking scope. Drink it down in one great gulp, and be astonished.

I love this duology. Go. Buy it. Encourage Bard to write more. I NEED MORE BARD BOOKS DO IT FOR THE BOOOOOOOKS.

Note
These two books cover the original Mating Flight serial. They do not include Disintegration, which is being serialized now. Disintegration will be a separate, third book.
Other Ways to Support the Author
If you do not wish to buy, or cannot afford it, that's fine. If you like the story, please spread the word! Recommendations to friends, retweets and posts pointing to your favorite story installments, reviews on your own blog, etc., are all much appreciated.

For those who've read Mating Flight already: reviews on Amazon are especially helpful! These increase the book's visibility on Amazon -- not just for people who go to the page and look at them, but also by making it more likely that Amazon's algorithm will display the books on the homepages of shoppers.

Marketing
This launch post was assembled by Bard's good friend

rowyn, because while she failed Marketing 101, Bard Bloom did not even take the class, and was in fact escorted off the school premises after breaking down in pitiful whimpers on the front stoop. Rowyn is the author of A Rational Arrangement, a delightful polyamorous fantasy romance. It has too many humans and a tragic lack of dragons, but there are giant sapient cats, so it's not all bad. You can buy it here: Amazon ~ Kobo ~ Nook ~ iBooks ~ Print